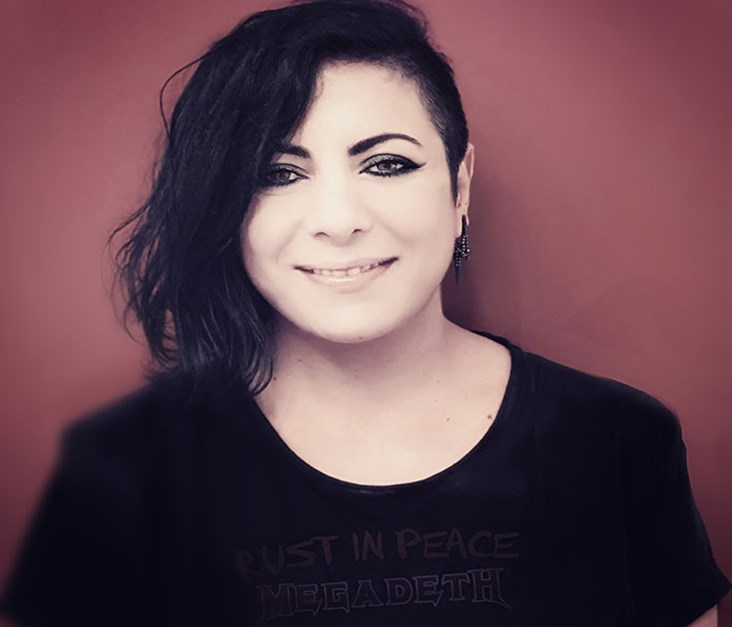 Reine Abbas, a successful serial entrepreneur, university professor, single mother of 3, and artist, envisions a world that is very much dependent on technology – specifically on digital games – providing the generation of tomorrow with a lifetime toolbox.

With over 15 years of experience in the gaming industry, Reine has founded several video games as well as gaming startups. When Reine created the video game Douma in 2007, it was then that she began her entrepreneurial journey and had to take in all the responsibilities that came with it. The first gaming startup she co-founded along with Ziad Feghali in 2008 was Wixel Studios that was the first indie gaming company in Lebanon.

While working at Wixel Studios, Reine’s son one day told her that he’d like her to teach him how to create video games after seeing her create them. He wanted her to come to his school and teach the students there how to code because everyone is playing with video games but no one is creating them.

Finding it outrageous at first, Reine decided to approach her son’s school and propose the idea to his teacher. With her great skills at persuasion, Reine was able to prepare and give a 14-hour course on game coding, design, and storytelling. The results were outstanding - the school and Reine received wonderful feedback from the parents saying that this experience has changed the lives of their children.

The course’s success drove Reine to create Spicatech Academy for the purpose of creating independent gamers and producers by giving them a lifetime kit to create any game from scratch. This will grow the gaming industry in the region by creating new games instead of Arabizing video games. Beginning as a mobile academy giving workshops here and there, Spicatech is now being integrated in 2 schools to teach coding during school hours.

From that moment on, Reine heads over to work where she has to take care of running Spicatech from making deals with clients to managing the team that is working on the online platform.

Reine wants to expand her scope of access to reach as many students as possible to teach them how to code. Creating video games, she believes, can give them skills to think logically, tell a story, design a game, market a product, solve problems, be a producer, and manage both projects and time.

“I dream of gamifying the whole educational system at schools by studying through apps using the students’ passion for games.”

As a multitasker and entrepreneur, Reine spends her day taking risks, generating new ideas, marketing, running her startup, and dealing with banks and financial and legal duties.

After her busy workday, Reine goes from being an entrepreneur to teaching Masters Students at 4 different universities. Why does she teach you would ask?

For Reine, teaching is a way of learning and progressing by helping students solve some problems they might face. Being a professor imposes on her the duty of staying updated on the recent trends on 3D animation, technology, and game design to provide her students with the latest. In addition, the capability of supervising and monitoring the work of her students provides her with the ability to choose students to work with her consequently creating jobs for many.

Aside from being an entrepreneur and working on her startup during the day, Reine is a single mother of 3 children that she prepares for school every morning and tuck into bed every night.

Her children have been an essential element throughout her entrepreneurial journey just as when she first launched Wixel Studios, she was 3 months pregnant with her first child. Also, her children have always been an inspiration for her to create more just as how her son inspired her to create Spicatech Academy.

Reine took all the responsibilities that come with being an entrepreneur yet having her children was never an obstacle. Many would often ask her: “How do you manage between your family and business?” Her answer would always be:

Her day does not end here.

After tucking the kids in bed, Reine is free to work on some freelancing projects that include animating and painting as her own personal escape. Initially an artist, Reine takes on such projects to revive the artist in her through creating and innovating music videos for bands or paintings for her upcoming art gallery in New York.

With all the responsibilities and duties that come with being an entrepreneur, Reine often feels like she needs to escape from this world to avoid the stress that comes with it. Although she does wish to just turn off her phone and escape, she acknowledges that being an entrepreneur, a mother, and a professor are all choices and challenges she chose to take.

Also, Reine has received a lot of awards for her success in the world of gaming as well as entrepreneurship which impose on her to stay at the top - adding on her more pressure.

It is true that Reine has achieved a lot of success for her works, but she has a different view on what success is. Reine believes that success and failure are two ends of the same sword. Success may elevate the ego of an entrepreneur making them forget the steps they had to climb to reach such a position whereas failure drags them into a deep black hole making them feel negative about everything until they eventually gives up.

When Reine created the video game Douma in 2007, it witnessed massive success in a time where there was no social media to market and promote the game. Reine did not raise her ego, but instead, always remembered what made her the entrepreneur she is today.

“The 3 top skills to be a successful entrepreneur are being positive, being passionate, and having fun.”

Reine’s advice to new startups, based on her experience, would be to ignore what negative vibes society spreads. Don’t let anyone stop you from doing what you believe in because some people might steal your idea or not believe or invest in it.

Reine believes that correctly delegating the work to the ones who can handle it professionally is important, yet many entrepreneurs always fall in the problem of stubbornly thinking they can do everything. Don’t be stubborn, and always listen to older entrepreneurs and experts to learn from their experiences.