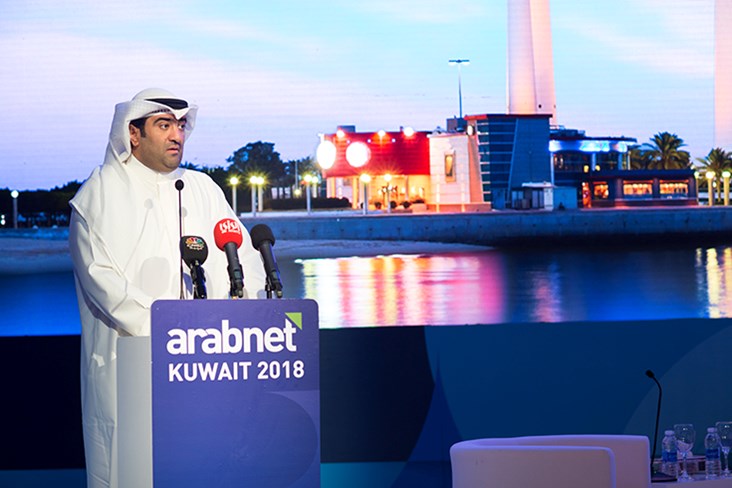 Under the patronage of H.E. Khaled Nasser Abdullah Al Roudan, Minister of Commerce and Industry - Kuwait, over a 1000 of the region’s government leaders, digital practitioners and entrepreneurs gathered for the third edition of Arabnet Kuwait on October 8th, at Courtyard by Marriott. The high-level sponsors include Boubyan Bank, DMS, Kuwait Finance House, KUWAITNET, Al Khaleejiah and VIVA Kuwait.

In his opening speech, H.E. Al Roudan focused on the importance of digital transactions and the related trends in trade and economy worldwide, pointing to an increase in the volume of total spending in technological and electronic payment, which greatly reduces the traditional way of dealing.

Al Roudan stressed that this positive push facilitated the electronic and rapid transactions and issuance of commercial licenses and encouraged the entry to the market and entrepreneurship, pointing out that the Ministry of Commerce and Industry received applications for the issuance of licenses electronically at the Kuwait Business Center (KBC) for one-person companies, micro-enterprises last year and mobile vehicles, in addition to regular companies.

Al Roudan said that the digital registration simplified the procedures for establishing companies and improving what is adopted in this framework to eliminate the long documentary cycle and its impurities, as well as “nepotism” in issuing the license.

He also added that the use of digital solutions is a direct support to entrepreneurs, which makes them manage their money efficiently, and therefore is reflected certainly in a revenue increase to the national economy and efficiency growth in the performance of different economy sectors, stressing on the need to create new opportunities in the national economy by attracting international companies and benefitting from the technology expertise.

The conference kicked off with a panel of global investors tackling, “Global Trends: What’s next for Tech Investors?” The panel gathered leaders from Mustard Seeds, Lumia Capital, HOF Capital, 11.2 Capital, Alrai Capital and Global South Tech to discuss the hottest startups they’re investing in today. It also introduced a new concept - the 60-second VC - where investors took part of a game-show style session, which had them hitting the buzzer for the chance to answer questions from the moderator and audience.

On the same day, the E-commerce track brought the leading e-commerce and e-retail players such as Ulugbek Yuldashev, Founder of awok.com, one of the fastest growing e-commerce sites in MENA, and Abdulwahab Alessa, Founder of Boutiqaat, the region’s undisputed leader in social commerce.

Moreover, Arabnet Founder and CEO, Omar Christidis announced the launch of the “Kuwait Innovation Economy Tech Startups 2018” report which addresses the main challenges facing tech startups in the ecosystem. "The Kuwaiti Government has been increasing its efforts in encouraging and supporting the local entrepreneurship ecosystem through various initiatives and by modernizing its economic framework. This research, conducted by Arabnet, provides an overview of the gaps and strengths of the ecosystem and the challenges faced by Kuwait tech startups."

Arabnet Kuwait also featured The Startup Battle competition, where the top 10 startups from Kuwait pitched on stage for the chance to compete against the best in the region at the Startup Championship (for a chance to win $20,000).

The conference was preceded by Founders’ Day, sponsored by Boubyan Bank, and taking place for the first time in Kuwait. Industry experts from MMP WorldWide, Bayt, Startupbootcamp MENA and several others engaged the participants with two tracks of hands-on workshops covering entrepreneurship and cutting-edge technology.

Arabnet Kuwait continues for another day with Kuwaiti banking leaders from Boubyan Bank, KFH, NBK Capital, among others. Beyond fintech, the Media and Adtech track is not to be missed as well featuring marketers from Snap Inc., Beattie + Dane, Twitter, DotSpace Group as well as Kharabeesh. The day will be packed with panels, international speakers and one-on-one interviews.