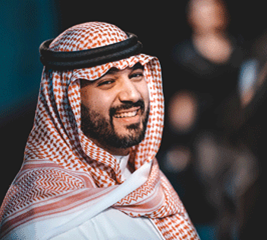 President of the Saudi Arabian Federation for Electronic and Intellectual Sports (SAFEIS) and the Arab eSports Federation
HRH Prince Faisal bin Bandar bin Sultan bin Abdulaziz – President “It doesn’t matter if your big or small, young or old, male or female in gaming and eSports skill is the

only differentiator.” – HRH Prince Faisal
His Royal Highness Prince Faisal bin Bandar bin Sultan Al Saud is the president of the Saudi Arabian Federation for Electronic and Intellectual Sports (SAFEIS) and the Arab eSports Federation. He was appointed in 2017.

Prince Faisal organized many national and regional tournaments in 2018 that brought together male and female gamers across the Middle East. The Prince also led multiple teams at international eSports competitions such as the 10th edition of the IESF eSports World Championship in Taiwan, where the Saudi national team won first place in Tekken 7.

HRH sees his mission as being able to provide an environment that enables anyone who has a passion for gaming and eSports. “SAFEIS as a federation is here first and foremost for gamers. We define success as having both world-class elite gamers and the developers, writers, musicians, and coders who create the games. Our goal is to have an industry—from broadcasting and event management to ICT infrastructure—where everyone who has an interest in gaming can contribute,” said HRH Prince Faisal.

On the governance front, HRH has worked with local government entities and other national and international gaming and eSports federations on regulations and partnerships that would help position Saudi as a global gaming hub.

As the son of HRH Prince Bandar bin Sultan, the former Saudi Arabian ambassador to the United States of America from 1983 – 2005, Prince Faisal spent much of his early years in the US, where he graduated from Baylor University in Waco, Texas, in 2003 with BA in telecommunications.

In 2005, Prince Faisal returned to Saudi Arabia and took a lead role in managing his family’s private sector business affairs. In that role, he facilitated the entry of numerous firms into the Saudi Arabian and broader Middle East and North African markets.

A gamer at heart, HRH Prince Faisal grew up playing Madden Football, where he was known among friends as being an expert. Today, he enjoys games like Assassin’s Creed which he believes are more about good storytelling—something found at the center of Arabic culture which he feels portends great potential for Saudi’s and Arabs game developers.