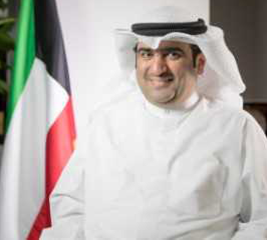 Minister of Commerce and Industry - Kuwait

Khaled Roudan is a visionary, passionate and entrepreneurial minister, driven by his strong belief in the capacity of Kuwait and its young people to alter the country’s economy into a more liberal, inclusive and socially just one. Coming from a successful private sector background and a history of activism, he thrived, within one year of his mandate, to reduce the companies’ registration time from three months to three days, legalizing “Home Businesses” and implementing multiple policy initiatives within the reform strategy he has put in place. His vision is to transform Kuwait into an economic and logistics hub for the MENA region, maximizing on the Kuwaiti and Arab talents to innovate and start their own businesses. His professional journey within the private sector started in the marketing and advertising industry, until he started his own business “Senyar” which is a leading company with five subsidiaries specialized in advertising, production, public relations, technology, social media and sports management. Khaled Roudan is one of leaders of the “Nabiha Khamsa” campaign for electoral reform, the “Khalass” campaign to issue the Sport reform act in Kuwait, as well as several youth awareness campaigns. He’s also a founding member of Kuwait Economic Association, ex-board member of the Youth Arabian Leadership Organization and of the Kuwait Achievement Organization. Khaled Roudan has won several awards including An Effective Youth by Khaleejesque Magazine (2013) and Most Successful Management for Sport and Creative Events by Alanba Newspaper (2013). He was also a nominee of the Sport Creativity award of Mohammad Bin Rashaid Al Maktom (2013), and his name was mentioned in the Book of Faces from Kuwait by the author Hamzah Al Alian as the Best Kuwaiti Personality with Creative.